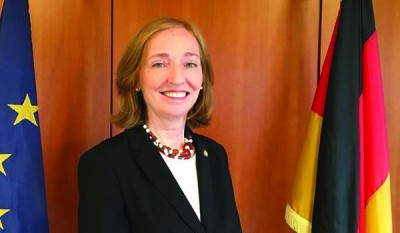 Germany has a new ambassador at the German Embassy in Washington: Emily Haber, who began her work on June 19, 2018.

Ambassador Haber joined the German Foreign Office in 1982 and has had an impressive career that included postings in the former Soviet Union, Russia and Turkey. This certainly sits very well with the current challenges at hand in the U.S.

Even before starting her new appointment, Emily Haber made history as the first woman to serve as the German Ambassador to the US. On June 22th, 2018, Ambassador Haber presented her credentials to President Donald Trump in a ceremony at the White House (photo). Meanwhile, former Ambassador Peter Wittig will be leaving the U.S. to serve as the German Ambassador to the United Kingdom. “DC has been a great home to me and my family for the past four years,” he said on Twitter. “I thank all of my followers as I pass the torch to new Ambassador of Germany and close friend Emily Haber.”

Coincidence would have it that HEIMAT abroad co-publisher Petra Schurmann met Ambassador Wittig on his very last day in office in Los Angeles. Ambassador Wittig was part of the delegation to accompany Federal President Steinmeier during his visit to California on the occasion of the inauguration of the new Thomas Mann House Artists in Residence. We have the exclusive report onpage 13 for you.