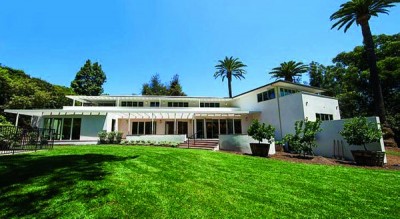 It is rare that a head of state makes a stop in Los Angeles but on June 18, 2018 this actually happened: No lesser than Germany’s Federal President Frank-Walter Steinmeier arrived in Los Angeles in order to officially inaugurate the recently renovated former residence of Nobel Prize laureate Thomas Mann. The Mann Family had fled Nazi Germany in 1933 to Switzerland and then to the U.S. in 1938 where they first lived in Princeton, New Jersey, and later in Southern California. The house on 1550 San Remo Drive, for which Mann commissioned architect Julius Ralph Davidson, became the home of the Mann family from 1942 to 1952. Davidson, born in Berlin in 1889 and a resident of Los Angeles since 1923, is considered one of the main representatives of “California Modernism”.

Thomas Mann became a leading figure of exiled German intellectuals and his residence in Pacific Palisades, not far away from Martha and Lion Feuchtwanger’s Villa Aurora, a focus of German émigré life in Southern California”, a “place where intellect triumphed over barbarity” as Heinrich Wefing writes in Building Paradise: Exile Architecture in California. It was the house where Mann wrote “Doctor Faustus“, the third part of the Joseph trilogy, and his influential radio speeches “To the German Listeners“ (“Deutsche Hörer!”), which were broadcast by the BBC to Germany during the Second World War and formed an important counter message to the Nazi propaganda.

When the house was put on the market for sale in 2016 and risked to be demolished, the Federal Foreign Office headed then by Frank-Walter Steinmeier, stepped in and purchased the house on behalf of the Federal Republic of Germany for 13 million US dollars in order to save such an important legacy of German exile culture. Mann expert Tilman Lahme called it an “auspicious moment for German cultural foreign policy.” Under the auspices of Villa Aurora & Thomas Mann House e. V., the Thomas Mann House is now home to a residency program and debate venue of German intellectuals offering them – in the spirit of Thomas Mann - an opportunity to engage in an exchange about topics that pose major challenges on both sides of the Atlantic.

After a thorough 18-month-restoration of the historical building that came at a cost of another 5 million US dollars and is still not completely finished, Steinmeier had come to see the results, accompanied by his wife Elke Büdenbender and a delegation of Thomas Mann fellows and supporters. The building‘s structure has been maintained, but the interior was completely changed. The only room that has been kept is the building‘s historical core, Mann‘s former study. After a private tour given by Thomas Mann’s grandson Fridolin who lived in the house as a child, and his wife Christine, Steinmeier addressed the circle of 250 hand-selected guests from the fields of culture, science, politics, and the media, among them outgoing German Ambassador to the United States, Peter Wittig.

In his speech, the Federal President expressed the wish that the Thomas Mann Fellows “fulfill this house with a democratic spirit - and with debates bridging the continents.“ This, said Steinmeier, “is the core to which this historic place and these new fellowships should be committed: a change of the mental climate; a new spirit in which democracy will thrive.“

After his speech, Steinmeier mixed and mingled with the guests while soft piano music filled the beautiful park-like surroundings of the 5-bedroom estate. The next day, Steinmeier opened the conference “The Struggle for Democracy“ at the Getty Center in Los Angeles with a poignant speech calling for commitment and creativity in the defense of democracy: Democracy, he said, “cannot be won without an idea of “the democracy of the future.” The endangerment and future of democracy were discussed by the Thomas Mann Fellows and US intellectuals.

From Los Angeles, the Federal President‘s delegation traveled on to Silicon Valley in Northern California, where the focus on the topic of democracy was continued: Frank-Walter Steinmeier led an expert discussion on the challenges of digitization and its societal developments brought about by the digital transformation in the field of artificial intelligence, as well as the future of employment and its consequences for democracy.

One can only hope that Steinmeier‘s call to preserve and safeguard democracy was heard on the Atlantic side of the American continent as well.