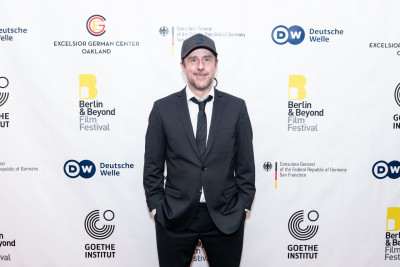 Lightbox
Beschreibung: Born in Hamburg, Bjarne Mädel went toCalifornia in March to receive the “Spotlight Award” for his role as Georg Schneider inthe film “25 km/h” at the “Berlin & Beyond. Festival” in San Francisco. In his acceptance speech at the Castro Theater, Bjarne described how he had gotten this role: “The casting agent of “25 km/h” showed the director Markus Goller two photographs before the shoot: One of Lars Eidinger and one of Bjarne Mädel. She said: “Either you’re doing the movie with these two guys or don’t do it at all”. And as you can see, the director listened to her and that’s why I’m here tonight. And now, I wish you “good luck” with the movie!” After the film, our HEIMAT abroad contributor Kathrin Schönberg met Bjarne for a short interview

First of all, welcome to California and congratulations on the Spotlight Award. You’ve lived and studied in California before. Where and when was that exactly?

Yes, I studied at the University of Redlands for two years. It’s between L.A. and Palm Springs close to the desert. After graduating high school, I came to California because we have distant relatives here. My grandmother’s cousin emigrated in the early 1960s and her family now lives in Palm Springs. When I was 15 years old, I traveled to California for the first time and found it easy to imagine living there one day. After graduation, I was exempt from military service and thought: I’ll go take a look and see if I could live over there. At first, I lived with my relatives. They had a painting company and I helped out on the construction sites to make some money. Later, I studied literature and creative writing.

Do you often come back to the U.S.? Yes, my dad has been living near Pasadena for over 25 years and I try to see him regularly. My sister lives in Oregon with her 5 five children, three of whom are already attending university. I am very close to my family here in America.

Do you have a favorite place in the U.S.? It probably sounds a little lame when I say San Francisco, but I think it’s just a great city. By contrast, L.A. is just terribly ugly and I’m not a fan anymore. It’s mainly due to traffic. Years back you could drive from Los Angeles into the desert and plan to return late at night and have the freeway almost to yourself. But now, the roads are never empty. I don’t own a car anymore myself, but I think it’s really sad that they don’t think about improving the traffic situation.

That seems to be a bit different in the movie “25 km/h”. Did you have the streets all to yourself and your motorbikes? Oh, absolutely. The roads were always closed for filming, so no cars were in the way.

Were you able to get around a lot during the shoot or did you mainly film in one place?The film was a real travel production with the whole team out and about. And that’s always great fun, because it’s a bit like a school trip. On other productions, they send you to your hotel at night and that’s it. It allows very little contact with the film crew. In a travel production, you are on the road together, and in the evening, you’re sitting in the hotel with everyone and I just love that. It was a really good summer.

“25 km/h” is a film about family and it shows us beautiful corners of Germany. Did you discover a new favorite spot in Germany during the shoot? Personally, I thought the scene on the lake was just wonderful. The Black Forest is really beautiful. The lake you’re referring to is privately owned by someone in North Rhine-Westphalia. You drive through a tunnel and then this beautiful silver lake appears. The problem, however, was that the lake is always in the shade and was therefore very cold. We had to jump in three times and frolic around and swim in it, but when we got out, Lars and I had circulation problems. The film crew always has the Red Cross in tow, and they helped Lars to get out of the water. I got out on my own, but then shivered for more than an hour. That was physically a tough production day. The step dance scene was just as bad, but for different reasons.

This brings me exactly to my next question: Can you really step dance and play table tennis as well as it’s portrayed in the film? Yes, we had to learn both. And that’s the great thing about our profession. We got table tennis lessons and I am still playing now. I have a great coach and when I look back at the table tennis scene today, I find it kind of lame. You really get better fast and start to play flatter over the net. Lars and I were very ambitious with table tennis, while our step dance lessons were more of a pain for us. For this scene, we had the whole town square closed off for about ten to twelve hours, and it rained for eight or even more of them. That was hell. It was so bad that we were only able to shoot the whole dance twice and we were afraid that we would slip and fall while dancing and not being able to finish the scene.

Would you go on a road trip yourself or would you prefer a different kind of vacation? I like a bit more comfort now, to be honest. I have nothing against adventures. Back in the day, when we went on road trips we used to sleep in the car, but today, I think my back would probably not forgive me. But, for example, on my birthday, I’ll drive from San Francisco to Los Angeles with my girlfriend. It’ll be a relaxing drive down Highway 101 and then we’ll visit my dad.

We write a lot about “HEIMAT” in our magazine. You live in Berlin now. Do you miss your "heimat" Hamburg from time to time? Yes, definitely, but it’s a quick train ride from Berlin, and I’m there quite often. I was filming in Hamburg until last night and I always have lots of reasons to go back to Hamburg.

Is there anything you miss about life in America and things you don’t miss at all? I always miss M&M’s with peanut butter filling, they don’t have them in Germany and I don’t know why. I believe a lot of people would buy them. But the obsession with cars in the U.S. is awful and that’s also a reason why I wouldn’t want to live here. I wouldn’t want to spend my life in a car. The scenery here is beautiful, of course, and what I said about cars may sound a bit severe, but that’s just because I spend most of my time in L.A. with my dad, where the traffic is particularly bad. Apart from that, I watch tons of Netflix shows. There are always great U.S. shows, which I, as an actor, naturally follow. One of my favorite shows is “Curb Your Enthusiasm” with Larry David. In Germany, the show is called “Lass’ es Larry” but hardly anyone knows it. It’s hard to dub the show. With “25 km/h”, on the other hand, the subtitles work quite well, I read some of them.

Today, you live in Berlin, you were a policeman in “Mord mit Aussicht” in the Eifel and, like Schotty in the show “Tatortreiniger”, you are from Hamburg. Our question: Do you drink Astra, Bitburger or Berliner Weiße? Umm, none of them really. I used to drink more beer in the past, but not anymore. If I drink a beer today, it’s usually something light, such as Corona or Beck’s Gold.

Well, you can definitely find a light beer here in the U.S.! On that note, thank you so much, Bjarne, for talking to me and I hope you will have a great time in California!